Newly-elected Councillor Richard Shaw has got straight to work by delivering improved bus stops in the Meadowhead area. 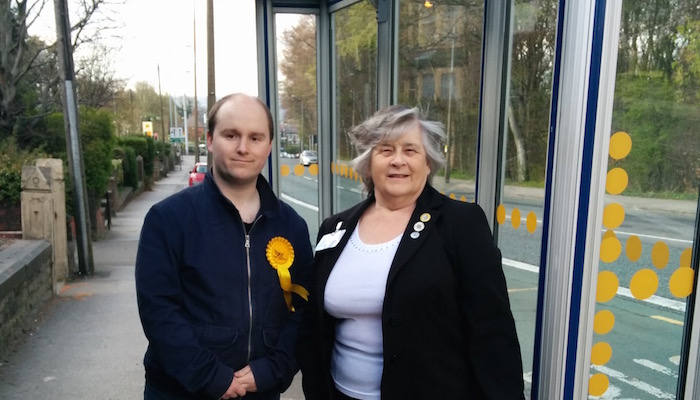 Transport bosses have installed new seating at a bus shelter at the Waggon and Horses Garage on Meadowhead, following months of Lib Dem campaigning.

Richard’s campaign follows the decision of Labour Transport Bosses to slash the Number 17 bus service, forcing elderly and vulnerable residents from Chancet Wood to walk longer distances to access bus services. However, some of their nearest bus stops currently lack seating or even timetables.

Cllr Richard Shaw said, "I'm proud to have been elected councillor for this great area and I'm delighted that within weeks I've already started to deliver for the local community."

"With the scrapping of the 17 bus, elderly and vulnerable residents were being forced to walk longer distances to a bus stop, only to be left with nowhere to sit when they arrived and no timetable to check for upcoming services. Although this is only a small step in the right direction, it will be a big improvement for those elderly residents who use the stop."

It has also been revealed that £46,000 could be made available to fund up to seven new electronic displays for bus stops and Richard Shaw is now campaigning to bring these to bus stops near Chancet Wood.

Richard said: "I'm delighted that we've secured new seats for this shelter but I'm determined to deliver electronic displays as well. It's only fair that priority is given to elderly residents who have been put at considerable inconvenience by the bus changes that transport bosses have forced."